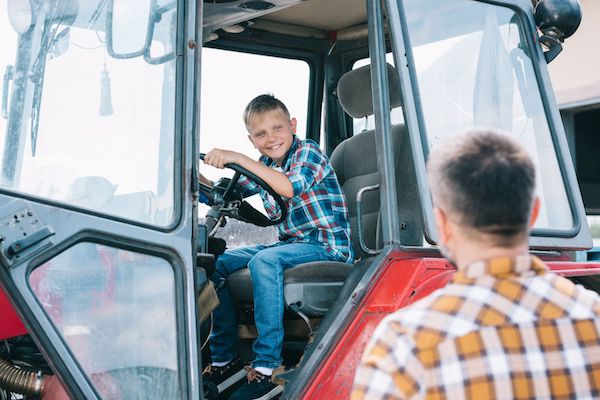 Being a father brings some of life’s greatest joys. I was privileged to have had a father who enjoyed his children. He wanted you to be around, found something useful for you to do, and taught you skills that made you feel valuable. My dad taught me to drive a tractor, weld, work with cattle, and scores of things that have been with me all my life. Most of all, he enjoyed being with me. I picked up that desire to be with my kids from him because they have been one of my fondest enjoyments in life.

Fatherhood was meant to be enjoyed. The little ones change so much in the first year, and it’s so much fun to watch them explore their world. Then the toddler years come where they are so funny. They say things so spontaneously that they take us by surprise. Like the time our son Eric said, “Look, the rain is licking up our hop-scotch from the sidewalk.” Or what our little daughter said in response to a car commercial with the car flying through the air, “Oh, what a strong car.” During a conversation with our little son Ryan, we told him that Daddy had Indian blood, which meant that he and his brother and sister also had some Indian blood. He was very puzzled and asked about his mother; we replied that she did not. To which he asked, “So what are you, mother, a cowboy?”

God was so good to me because I had a job where I could often take my kids with me for a few hours on almost any day. Honestly, I loved taking them with me and never felt more proud than when they were in my company.

Fathers, God gives us these unique years to love, teach and inspire our children, and because we do that, we get their admiration and respect for life. That is worth more than all the bonuses and financial incentives in the world.

One of my all-time favorite scenes in the Bible is when the prodigal son comes home to his father after his wayward journey that has ended in abject failure.  He finally comes to

his senses and realizes that everything he searched for was back home with his father.  “But while he was still a long way off, his father saw him and was filled with compassion for him; he ran to his son, threw his arms around him and kissed him” (Luke 15:20). That day the son experienced his father’s forgiveness. The father’s acts of love are so profound, as he calls for the best robe to be put on him and to prepare the fattened calf for the celebration.

When a child grows up in a home with acceptance, forgiveness, and love, their self-esteem will be much higher. Fathers, our acceptance of our children will impact how they live the rest of their lives.